You know Halloween is coming when your Pinterest screens are full of pumpkin decorating tips, techniques, templates and tutorials. Each year I am amazed at the diversity and creativity that people put into creating their perfect pumpkins.

Like anything else, pumpkin decorating follows popular trends.  I saw plenty of Pokémon Go pumpkins on Pinterest following the smartphone game that was released this summer.  Speaking of smartphones, emojis, BB8 from Star Wars: The Force Awakens and Jack from The Nightmare Before Christmas are also prominent both in painted and carved pumpkins.

Animated films and cartoons are also well represented by the ever popular minions from Despicable Me, the foursome of Teenage Mutant Ninja Turtles and the Disney/Pixar franchise with characters from Finding Nemo, Frozen and the princess of the pumpkin carriage, Cinderella.

What fascinates me is the evolution of pumpkin decorating from the jack o’lanterns that we attempted to carving as kids with the two triangle eyes, triangle nose and a jagged mouth to some really outstanding and artistic carvings, yes, including some good old fashioned traditional Halloween horror.  Think pumpkin cannibals, pumpkin gore and traditional spooky characters.

A variety of decorating techniques emerge from the simple to the complex and the whimsical to the elegant. One of my favorite ideas is slipping a pumpkin into a black fishnet stocking and calling it good. How easy is that? No fuss and no pumpkin guts.  Decorating techniques are as varied as the decorators.  Painting, gluing, bedazzling, stacking, adding gourds and props, there is no limit to where imaginations lead.

Each year, our employees are invited to decorate a pumpkin which is then displayed at our Heights store. Customers bid on the pumpkins with the proceeds going to a local charity.  Below are a few examples from years past.
This year’s charity is the Women’s & Family Shelter. Pumpkins will be on display from October 21st through October 27th.  On Saturdays, the 22nd and 29th, they will be set up for kids to come and paint their own pumpkin.
Visit our Pumpkins board on Pinterest at https://www.pinterest.com/gainansflowers/pumpkins/ and be inspired to create your own pumpkin art. 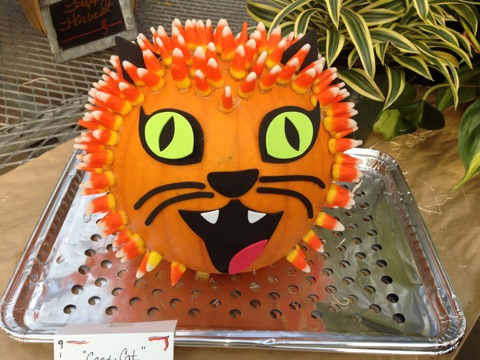