As published in the Billings Gazette

Now is a good time to plant potatoes 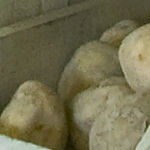 Tradition maintains that potatoes are to be planted on Good Friday to bring good fortune in the coming year. In our area, potatoes can be planted as soon as the soil can be worked, as early as March. If you plan to store potatoes for the winter, a second crop can be planted as late as mid-June.
A potato “seed” is just a cut piece of potato, usually about the size of a small egg having at least two “eyes” that will produce the sprouts. The cut pieces can be left to dry overnight and planted the next day or you can leave them in a bright place indoors until small sprouts are formed. Then they can be planted outdoors.
Choose a sunny location with lots of room for your potato vines to roam. Each plant will need four square feet and the vines can grow up to two feet tall. This may seem like a large area, but just remember that the average yield for each pound of seed potatoes is ten pounds of potatoes. It's well worth the effort!
The soil needs to be light with good drainage. Heavy soils that have poor drainage will produce deformed, knobby tubers.
Place your seed potato pieces cut side down in a trench four inches deep spacing the pieces about 15 inches apart. Rows should be 2 ½ to 3 feet from each other. Cover the potatoes with two inches of soil. As sprouts emerge, add another two inches of soil to the furrow. Continue this mounding process over each row until each hill is four inches tall and 18 inches wide.
Fertilize the soil around your seed potatoes at planting time with a fertilizer formulated for our soils, such as Jirdon® Vegetable Fertilizer (12-16-14). Keep the fertilizer at least two inches away from the seed potatoes.
Keep the vines well watered through the summer. Water your plants in the mornings in order to allow the foliage to dry before evening. Wet foliage can make a plant more susceptible to disease. Stop watering after the foliage turns yellow.
New potatoes form between the cut piece and the soil surface. Avoid hoeing weeds too close to the row to prevent damage to your tubers. Hand weed on top of the rows and mound the loose soil from between the rows up around the stems of the vines. The goal is to cool the soil, maintain a constant moisture level and protect the developing potatoes from the sun. If the potatoes get sunburned, they will turn green and be bitter.
Potatoes can be harvested during the season by gently loosening the soil and removing the largest tubers, leaving the small ones to continue to grow. Early potatoes can be harvested when you see the plants begin to flower.
If you want late potatoes for storage, wait two weeks after the foliage begins to die back, but before first frost. Carefully remove the potatoes with a spade. Allow the potatoes to dry, unwashed for a few days. Store unblemished potatoes only, in a well-ventilated, dark location. Keep the room cool, about 35-40 degrees and potatoes should keep for three to six months.


Jim Gainan is president of Gainan's Flowers and Garden Center in Billings, MT He can be reached by email jim@gainans.com.